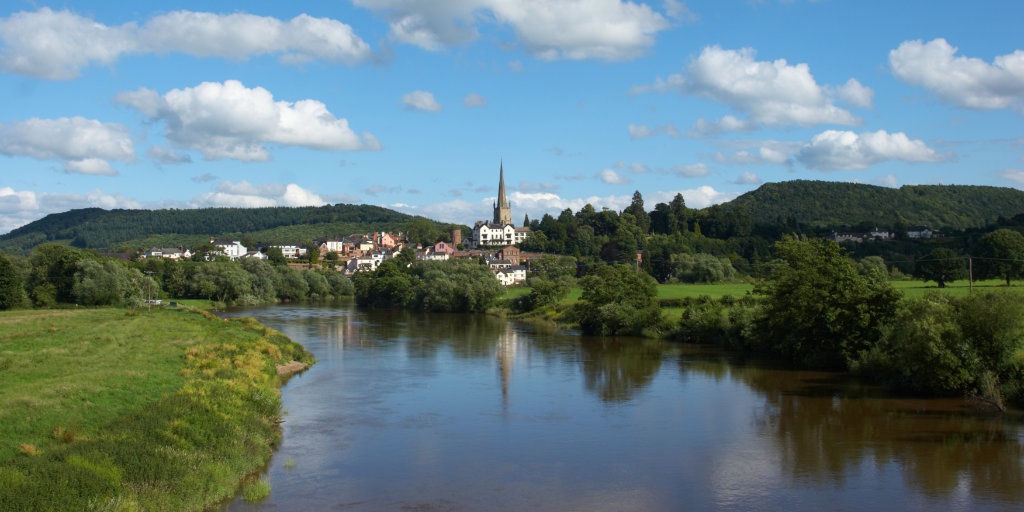 1. Goodrich Castle and Visitor Centre
Goodrich Castle stands majestically on a wooded hill commanding the passage of the River Wye into the picturesque valley of Symonds Yat. The castle was begun in the late 11th century, by the English thegn Godric who gave it his name. The visitor centre features a small exhibition which explores life at the castle from its origins in the late 11th century until its dramatic fall in 1646, and includes Civil War artefacts found at the site. A cafe serves meals made from locally sourced ingredients.

2. Croft Castle
Croft Castle is a late 17th-century house with fine Georgian interiors and a family connection dating back more than 1,000 years. There are restored walled gardens, stunning views over the Welsh Marches and miles of marked walks. It is renowned for its fine parkland, which contains more than 300 veteran trees. A walk through the woodlands reveals the Iron Age hill fort at Croft Ambrey, which commands views over fourteen of the old counties. Facilities inclue a tea room and plant sales.

3. Hereford Cathedral and the Mappa Mundi
Hereford, meaning ‘army ford’ was for many years a border garrison town against the Welsh. Just to the north of the river in the city centre, Hereford Cathedral forms the main point of architectural interest, an amalgamation of various styles from the 11th century onwards. In the 1980’s the sandstone New Library was specially built to house the Mappa Mundi. Dating from 1300 and drawn on a single sheet of vellum (calf skin), this remarkable map provides an extraordinary insight into the medieval mind.

5. Shortwood Family Farm
At Shortwood Family Farm you can get close to the animals and learn about real life on an ordinary farm. Milk a cow by hand, feed the pigs and goats and watch the machine milking the dairy herd. Hold a tiny newborn piglet or feed a calf with a bottle of milk. Take a trailer ride around the farm and see the beneficial effect that Organic Farming has upon wildlife. You can even take home some Organic Produce. Kids can also visit Mini Farm World, Pets Corner and the Play Area.

6. Mortimers Cross Mill
Dating from 1750, Mortimers Cross Mill is arare one-man-operated water mill in part working order, situated next to the River Lugg. In addition to crushing grain to make flour in the traditional way, the mill exhibition is expanding to include micro-hydro electricity and alternative energy. Nearby there are attractive gardens and woodland walks, a stone weir and the significant Aymestrey Limestone Quarry. Special day and evening guided tours for groups are available by arrangement with the owner.

7. Hampton Court Gardens and Castle
Hampton Court, Herefordshire is a castle on the meadows of the river Lugg, backed by a steep wooded escarpment and surrounded by woodland and grounds of 1,000 acres. Original Victorian walls enclose flower gardens divided by canals, island pavilions and avenues. Climb to the top of the gothic tower for a panoramic view of the gardens or descend underground to a tunnel that leads to a waterfall. Visit the Orangery Restaurant, located in a grand conservatory designed by Joseph Paxton.

8. Symonds Yat West Hand Ferry
Symonds Yat West is a small village on the Herefordhire side of the River Wye, conncted to Symonds Yat East on the opposite bank by two hand ferries. For a small fee, the ferryman will pull you accross the river using an overhead rope.The river here has cut a deep gorge in the limestone, exposing many impressive cliff faces. Nearby, Symonds Yat Rock towers over 390 ft above the river, and is an excellent vantage point from where to see peregrine falcons and other wildlife.

9. Hay-on-Wye and the Literary Festival
Hay-on-Wye has an attractive setting, amidst rolling forested hills, and its narrow bendy streets are lined with an engaging assortment of old stone houses. Most of the town is given over to the book trade, with over 30 shops selling everythinig from modern to antiquarian publications. The Hay Festival of Literature and the Arts, held over ten days at the end of May is now a major national event, having grown from1,000 visitors in 1987 to upwards of 150,000 visitors in the present day.

10. Wye Valley Canoe Centre
Explore the beautiful river Wye by kayak or canoe from Glasbury-on-Wye, Herefordshire. Situated close to the literary town of Hay-on-Wye, Wye Valley Canoe Centre hires Canadian Canoes, Double and Single Kayaks. Paddle off downstream to Hay-on-Wye which is a five mile journey taking approximately two hours, or to the Boat Inn at Whitney, which is ten miles away and takes about four hours. All equipment is provided, including waterproof barrels to store your kit in, and a map.