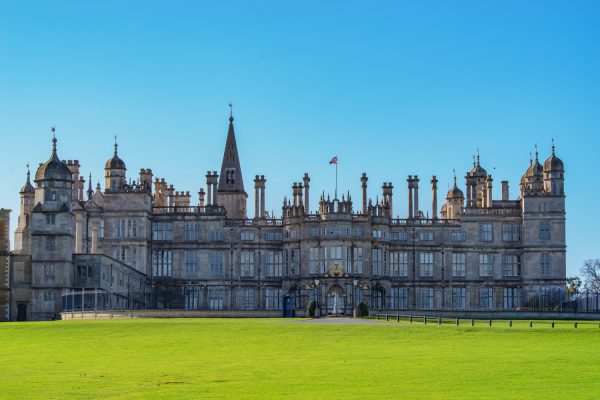 1. Burghley House
Burghley House is an Elizabethan mansion standing in parkland landscaped by Capability Brown. In the late 17th century, the fifth Lord commissioned incredible murals – most notably in the Heaven Room and the Hell Staircase, where the entrance to the inferno is through the gaping mouth of a cat. Sweeping vistas of deer park provide the perfect backdrop for a events including open air classical concerts. Facilities at Burghley include the Orangery Restaurant, cafe, gift and garden shop.

2. Mablethorpe Seal Sanctuary
A visit to Mablethorpe Seal Sanctuary offers a unique nature experience. Walk through two acres of sand dunes only fifty metres from the sea, and gain first hand experience of some of the country’s most stunning wildlife. The sanctuary rescues orphaned and injured seals and cares for them until they can be returned to the wild. Those that are too badly injured to be retuned live a contented existence in the Seal Sanctuary Pools, where you can see some of these long term residents!

3. Lincoln Cathedral
At the eastern end of Castle Hill, stands the west front Linclon Cathedral, towering cliff-like into the sky. The interior is a fine example of early English architecture, with bands of dark Purbeck marble contrasting with the limestone that is the building’s main material. The view from the tower is almost as amazing as the huge vaulted interior of the building itself, featuring an eccentric range of carvings, with scenes from the life of Alexander the Great and King Arthur mixed up with biblical characters and folkloric parables.

4. Battle of Britain Memorial Flight Visitor Centre
See these magnificent WWII aircraft including Spitfires, Hurricanes and a Lancaster Bomber at close quarters, and observe skilled and dedicated technicians working to maintain them in flying order at the Battle of Britain Memorial Flight Visitor Centre. Visitors are led on a guided tour around the BBMF hangar by knowledgeable and enthusiastic volunteer guides, who in many cases, have first hand experience of the aircraft. A permanent exhibition gallery explores Lincolnshire’s links with the RAF.

5. Tattershall Castle
Tattershall Castle is a medieval brick castle rising dramatically out of the Lincolnshire countryside. This fortified and moated tower was built in medieval times for Ralph Cromwell, Lord Treasurer of England. Explore six floors from the cellar to the battlements and find out more about 15th-century life using the audio guide. Walk in the grounds, on bridges over moats, and dress up in medieval costumes! Facilities include a gift shop which also sells hot and cold drinks and snacks.

6. Lincoln Castle
In 1068, two years after the Battle of Hastings, William the Conqueror began building Lincoln Castle on a site occupied since Roman times. Today, the castle walls incorporate materials from the 12th to 19th centuries, and the wall walkway offers great views of the town and surrounding countryside. The castle wall also encloses a large central courtyard, where a red brick former prison holds one of the four surviving copies of the Magna Carta, and a remarkable Prison Chapel.

7. Saltfleet-Theddlethorpe Dunes National Nature Reserve
This nationally important nature reserve consists of tidal sand, mud flats, salt and freshwater marshes and sand dunes. It’s well known for its diverse flora, including sea lavender, marsh helleborines and the spectacular Marsh Orchids which flower in June. There are extensive Samphire beds, a marine plant which is eaten as a local delicacy. Dykes and ponds support aquatic creatures including dragonflies, newts and the rare Natterjack toad. The reserve is also a haven for migrating birdlife.

8. Gainsborough Old Hall
Gainsborough Old Hall is among the best-preserved medieval manor houses in England. It’s a part brick and part timber-framed house, dating from the late 15th century with Elizabethan additions. The kitchens have remained virtually unchanged since they were built and feature an enormous fireplace. See the Great Hall with its splendid arched wooden roof, and climb the imposing lodgings tower from where you can enjoy the magnificent vista of the manor lands and the River Trent.

9. Gibraltar Point Nature Reserve and Visitor Centre
Gibraltar Point is an area of unspoilt coastline with important plant and animal communities. It is of international scientific interest comprising sandy and muddy sea-shore, sand dune, saltmarsh and freshwater habitats. The reserve extends a distance of about three miles along the Lincolnshire coast from the southern end of Skegness to the entrance of the Wash. Inside explore the Wild Coast Exhibition and Nature Discovery Room and visit The Point Cafe and Look-out gift shop.

10. Stamford
Beguiling Stamford, in the south west corner of Lincolnshire, makes a good base from which to explore. It’s an attractive town whose narrow streets are flanked by a handsome ensemble of antique stone buildings, and has on its doorstep one of the great monuments of Elizabethan England, Burghley House. Five medieval churches, a twelfth century priory and a fifteenth century hospital jostle with other fine medieval and Georgian buildings in this attractive provincialtown.