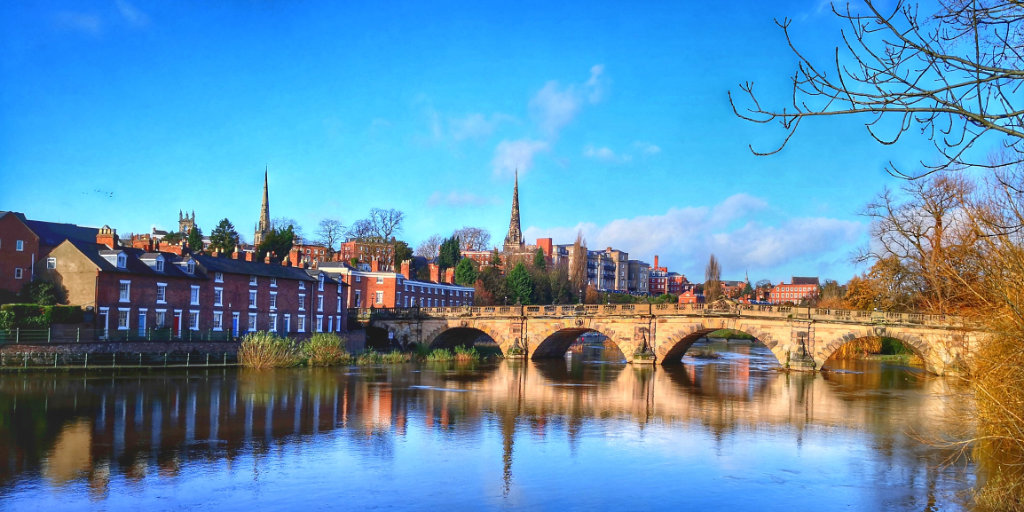 1. Acton Scott Historic Working Farm
Acton Scott Historic Working Farm demonstrates life on a Shropshire upland farm circa 1900. Visitors are transported back in time to the days of shire horses, hay ricks and milkmaids. You’ll see heavy horses working the land with vintage farm machines and milkmaids milking by hand and making butter in the dairy. The working farm museum also holds a number of special events throughout the year, including, the annual sheep-shearing, lambing, cider making and steam powered threshing.

2. The Severn Valley Railway
The Severn Valley Railway is a full-size railway line running regular steam-hauled passenger trains from Bridgnorth Station to Kidderminster. Dine in style as the countryside slips by – the restaurant car serves a traditional three course luncheon, freshly prepared in the on-board kitchen and with a choice of beef, salmon or vegetarian option. Your journey follows the meandering course of the River Severn for most of the way, and a highlight of the trip is crossing the river on the impressive single-span Victoria Bridge.

3. Ludlow and Ludlow Castle
Ludlow is one of the most picturesque towns in the Midlands, if not the country. The mixture of Georgian and half timbered Tudor buildings house a variety of small shops and Michelin starred restaurants, with rural Shropshire forming a drowsy backdrop. Ludlow Castle, a craggyNorman castle dating from 1086, sits on cliffs high above the river Teme. The imposing ruins include towers, turrets, gatehouses and concentric walls, as-well as the 110 foot high keep, and an unusual Round Chapel built in 1120.

4. Hawkstone Historic Park and Follies
Hawkstone Historic Park and Follies was created in the 18th Century by Sir Rowland Hill and his son Richard. Centred around the Red Castle and Grotto Hill, it offers visitors hours of adventure and activity, with stunning views of the Shropshire countryside and beyond. Intricate pathways, ravines, arches and bridges, towering cliffs and follies, the hermitage and caves combine to create a magical visit. The Greenhouse Tearoom serves snacks and light refreshments.

5. Stokesay Castle
Stokesay Castle is the finest and best preserved 13th century fortified manor house in England, offering visitors a unique glimpse into a distant age, and is set amid peaceful countryside near the Welsh border. The magnificent openhearthed great hall, with its fine timber roof, shuttered gable windows and precipitous staircase, has scarcely been altered since it was built. The grounds include cottage-style gardens, a tearoom open from April to October, and a gift shop.

6. Shrewsbury
Set amidst glorious countryside near to the Welsh Borders, Shrewsbury is one of England’s finest medieval market towns with an ambience all of it’s own, packed with black and white timber-framed buildings, steep streets and narrow alleyways. Many events take place throughout the year, including Shrewsbury Folk Festival, Shrewsbury International Street Theatre Festival and the world famous Shrewsbury Flower Show. Be sure to explore the narrow winding streets and make your own discoveries!

7. Wroxeter Roman City
Wroxeter was once the fourth largest city in Roman Britain. It began as a legionary fortress and later developed into a thriving civilian city, populated by retired soldiers and traders. The site museum and audio tour reveal how Wroxeter worked in its heyday, and the health and beauty practices of its 5,000 citizens. Dramatic archaeological discoveries provide a glimpse of the last years of the Roman city, and its possible conversion into the headquarters of a 5th-century British or Irish warlord.

8. Oswestry
The vibrant border market town of Oswestry sits between the patchwork plains of Shropshire and the mountains of Wales. Voted one of the coolest places to live in England,’ the combination of a charming medieval town and an eclectic mix of independent shops and fine eating establishments creates a special ambience. There is no better place to begin than The Oswestry Visitor and Exhibition Centre, with other attractions including the Qube Gallery and the 70 ft high Chirk Aquaduct.

9. Church Stretton, Walking in the Shropshire Hills
Church Stretton is a popular destination that makes an ideal base for hiking. This is prime walking territory and the heathlands are laced with footpaths, the pick of which offer sweeping views over the border to the Black Mountains of Wales. The Shropshire countryside to the east of Church Stretton is a beautifully formed complex series of hills and ridges. Less accessible and therefore much quieter than the Long Mynd to the west, the area provides a number of energetic walks.

10. Go Ballooning
Experience the tranquility and beauty of nature as you float above the Shropshire countryside. Espiritu Balloon Flights are operated by an experienced pilot with thousands of hours experience and offer ‘Real Ballooning’ by using smaller balloons and baskets that are easier to launch and land. Customers can get involved right away with hands on experience of helping to inflate the balloon prior to flight (optional) and activating the burners to increase altitude.